Growing Up with Early Adopters - Consumer Groups That Matter 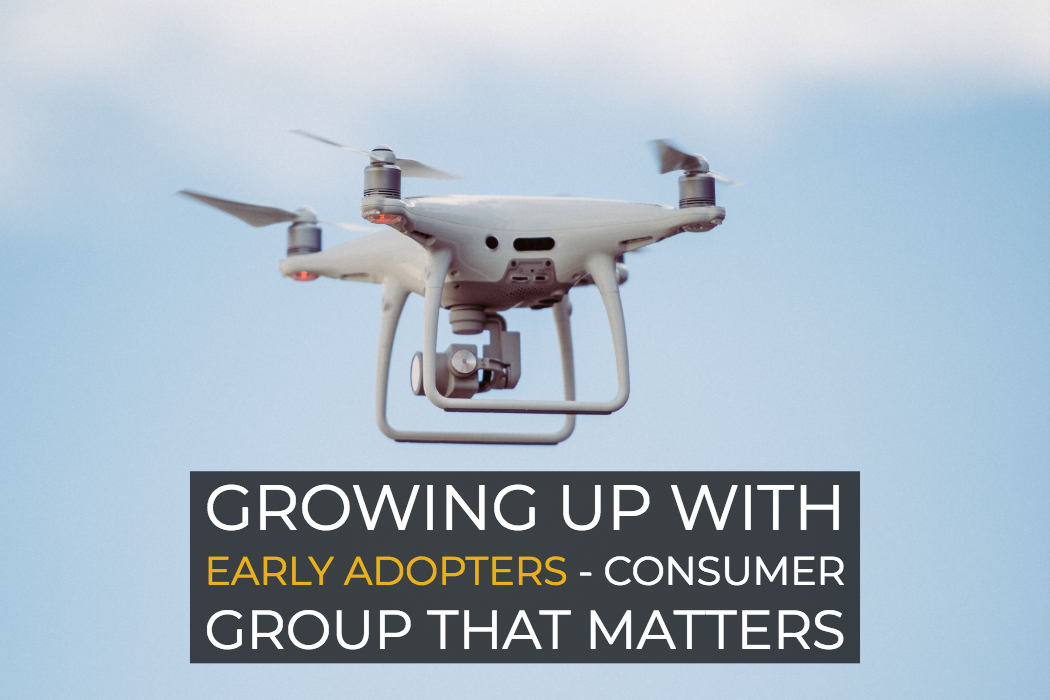 LET’S TAKE A LOOK AT HOW PEOPLE ADOPT INNOVATIONS - SOMETHING KNOWN AS DIFFUSION OF INNOVATION CURVE.

So my Dad was a computer geek in the time and place where this concept didn’t exist (the Republic of Georgia in 1980s.) Back then he was getting his PhD in Psychology and Sociology and in his free time building PCs from scratch in a little makeshift man cave in our house. He would bring home boxes and boxes of parts and then make a PC, using a small Russian made TV as a monitor. Needless to say, my Mum didn’t like the building part, but she was fascinated by the machine once it was up and running (Early Majority). I was 4 and had no idea what exactly this thing was for, but loved making it work, launching basic commands in MS-DOS. Windows reached us around the 1990s and the Late Majority in a 6-year-old me didn’t want to switch from MS-DOS, but I had no choice, Dad said Windows was the future!

What I am describing above is what marketers know as Everet Rogers’ theory of Diffusion of Innovation. The graph below represents the adoption curve, showing how consumers adopt any new technology. People and/or companies, even industries, can be on different stages at different times, but in its essence, any new technology goes through this curve, until it is adopted and takes the biggest share of the market.

Rogers’ book divides them into 5 groups.

Innovators - They are the smallest group, they usually have the closest connection to the scientific sources and often start using the product from its BETA version.
Early Adopters  -  The second smallest group, but the fastest growing. They are curious, risky, willing to try new things as soon as they can.
Early Majority - Adoption time takes longer for this category, they only try it once the first two groups have tried and successfully used the innovation. But this group is the most important, this is the group that brings the market share up and until an innovation reaches them, it is still in danger of disappearing and never becoming a mainstream tool.
Late Majority - They will eventually adopt, but reluctantly and very sceptically.
And Leggers - We all know them, still refusing to use smartphones and unable to log into their emails. In my family, it was my Nan, smart for her time, but convinced that me using Dad’s PC would make my brain rot and I would not do well at school. She’s managing to stream soap operas now.

So why are we focusing on Early Adopters? The group is small and their excitement in the innovation does not mean its success. But, they are the crucial group for market penetration. If they are not happy with your product, no one will be. If you are developing a new product or technology and try to reach a new market, you need to get to the Early Adopters first. This group is very outspoken, they take pride in their natural curiosity. They don’t mind learning and testing and being outspoken about what they’ve learnt and tested.

The reason I bring up my Dad’s example is that I watched him adopt more and more innovations as they came to exist. He had no manuals, there were no classes he could take to learn how to use PowerPoint (which he had so much fun with when it first was launched.) For him, it was a puzzle, a game  - trying to teach yourself using logic. And I was 6, behaving like Late Majority about Windows, slamming doors when MS-DOS was gone, too lazy to learn the new way.

As marketing gets more and more digital and Social Media takes over, Early Adopters become even more important. They are what we now call Influencers, willing to try your product and then talk about it. Nowadays Early Adopters are the ones who write reviews, record Youtube videos, tweet, share and therefore INFLUENCE! They influence the Early Majority to come and join as Early Majority prefers someone to have tried the product before and prove its use.

The interesting part of the above curve is that it doesn’t only apply to people, it can be companies or industries. Every time, say a new SAAS is launched, the adoption curve goes to a whole new, much bigger level.

Today's marketers live in an interesting time - in our own industry, in the last 10 years, we’ve had a boom of innovative tools, which changed the way we work forever and adopting early is crucial for us. As for our clients and their consumers, we have to reach out to them using these new tools, convincing the Early Adopters to pass the word around - to like, share, comment.

And with the digital world growing bigger and bigger Early Adopters become more and more important. They are the initial, loyal group to penetrate the market and secure the sale. After all, if it wasn’t for guys like my Dad, we would now still be playing this in MS-DOS.​