Superhero Marketing: Whatever it Takes 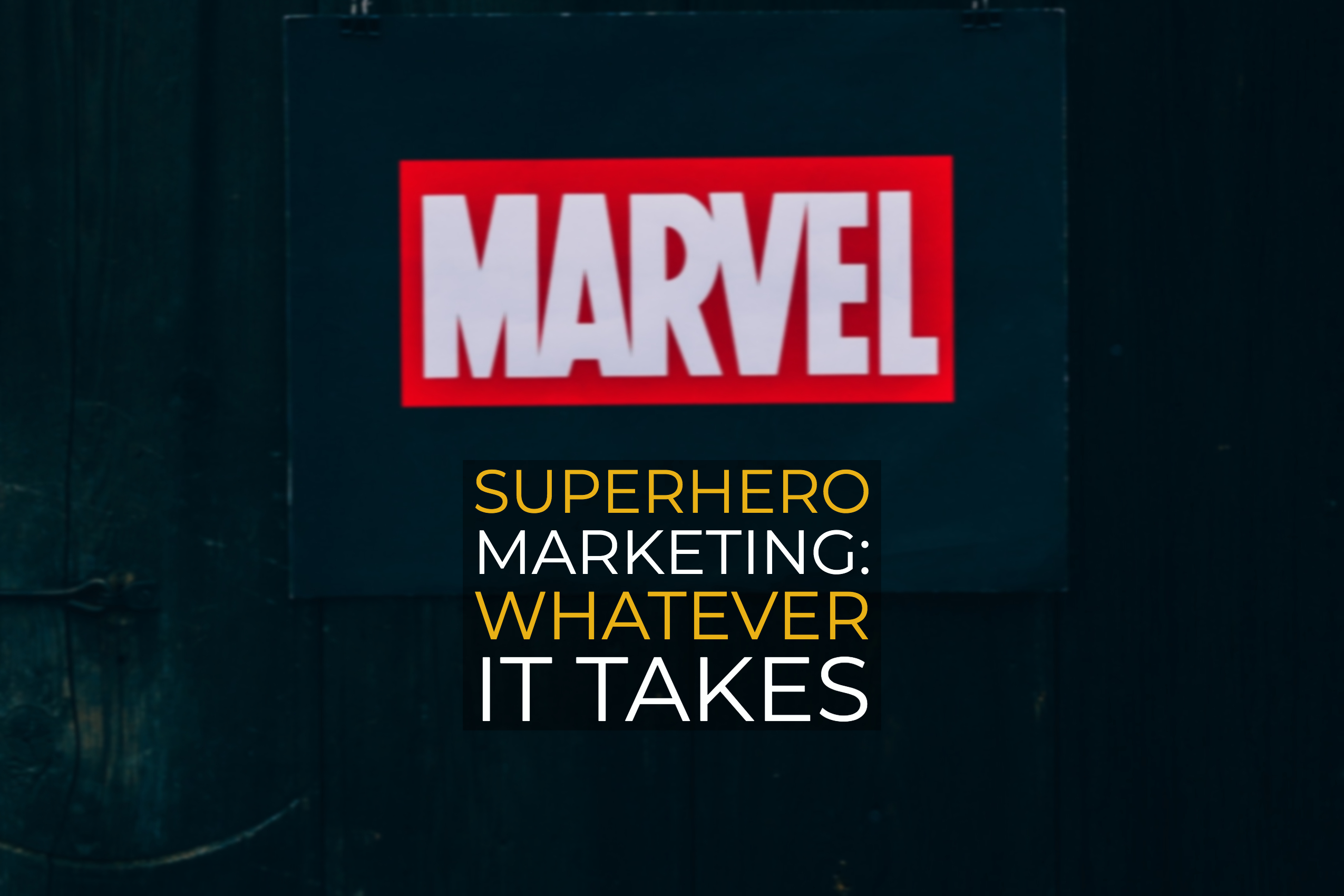 If I was to say this article was about the cinematic event of the decade, would you know what movie I’m talking about?

You might need to take a second or you might already know. April brings with it what some people are calling ‘The Cinematic Event of the Decade’ and by that I mean Avengers: Endgame is hitting our screens on April 25th and yes, I will be at there.

Avengers: Endgame is the culmination of a 22-film arc that the people at Marvel have been telling since 2008 with the introduction of Iron Man. It is the sequel to Avengers: Infinity War in which, spoiler alert! We saw many of our favourite characters disappear with a snap. As a result of the uncertainty of their fate (except Spider-Man, Nick Fury and Doctor Strange. We even know Guardians of the Galaxy 3 has been confirmed so we know they’re going to be alright due to the sequels) so many have been anxiously awaiting Avengers: Endgame’s release that it has been dubbed the most anticipated movie of the year.

The films total run time has now been released at 3 hours and 3 minutes long and during their first 4 test screenings no one, not a single person left the cinema until the last half of the last screening so take this as a warning. Limit your liquid intake and take snacks.

So what is it about this movie that has earned such a title?

Yep, Marvel has done this incredibly annoying and sneaky thing by bringing the movies out within a month of each other, meaning the only way you can see it and understand the progression of the storyline is by watching both movies at the cinema, which of course, increases their sales and profit margin. Sure you can try and watch it online, but even illegally streaming takes longer than 4 weeks to find a semi-decent quality video I’m sure.

Marvel have also managed to ensure its audiences watch to the very end, they’re so good at what they’re doing that they can keep you in that seat - staring at the big screen as the credits roll anxiously awaiting that post credit scene. Most people won’t leave until the lights come on and if you leave before that - well, have you seen a Marvel movie before?

I don’t often see Marvel at the cinema but I had too with Avengers: Infinity War to avoid spoilers and we sat, in the cold, until the lights came on just to make sure we didn’t miss anything. We weren’t the only ones. It was the same with the Guardians of the Galaxy 2 and Captain Marvel.

The creative minds behind Marvel are very clever and have learnt over time what they can get away with to capture their audiences attention and truth be told, they don’t need to do a lot. Marvel fans around the world are ready and waiting for the next thing to drop, whether it be an image on Instagram or a tweet that doesn’t come for months, they will wait.

The marketing for this movie has been slightly different than previous films as the first official trailer wasn’t released until December 2017, only 5 months prior to its release and only once they’d confirmed the title of the movie and even then they tried to keep that a secret until you’d watched the trailer. 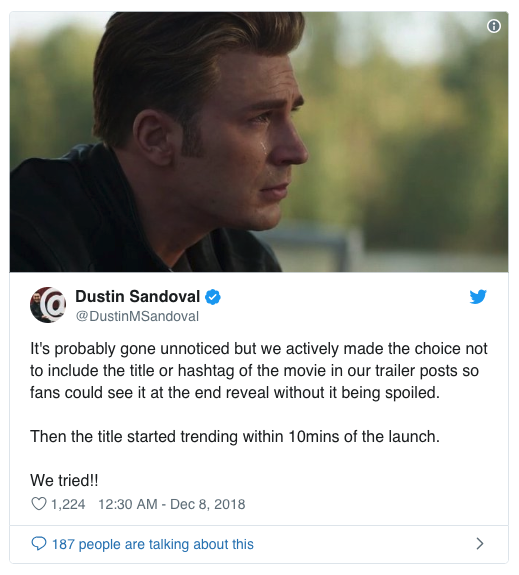 However, all it took was 10 minutes from the first trailers release for the title to be trending on Twitter, a huge feat.With less than a week to go, it seems now is the time they’ve decided to release more trailers, sneak peeks and most recently more scenes and snippets from the movie (I refuse to watch it so, no spoilers!)

2 trailers were released between December and April. A teaser trailer was launched when the cinema tickets were released, causing all sorts of chaos and most recently they’ve released a scene from the movie. None of which give much away about the movie and its plot, but instead are creating more excitement as the release day gets closer and closer.

Though little is given away, fans are watching and rewatching, analysing every single second of the trailers to see if they can find any clue that could hint at a possible outcome.

But do they really want to know more?

Back in March, Disney and Marvel Studios’ VP for Digital Marketing Dustin Sandoval asked if there should be any more trailers released for Avengers: Endgame on Twitter and the replies are pretty telling. Most responded to his tweet by saying No, it didn’t need another trailer, what they had was enough.

“No, I don't want to know any more than I currently know about it until I'm sitting in the theatre watching it. The fact that we know so little about it is part of what makes it so exciting, and I would hate to see them blow that.”

While another used an excellent Thor GIF in response, we don’t need another trailer, but another won’t hurt... 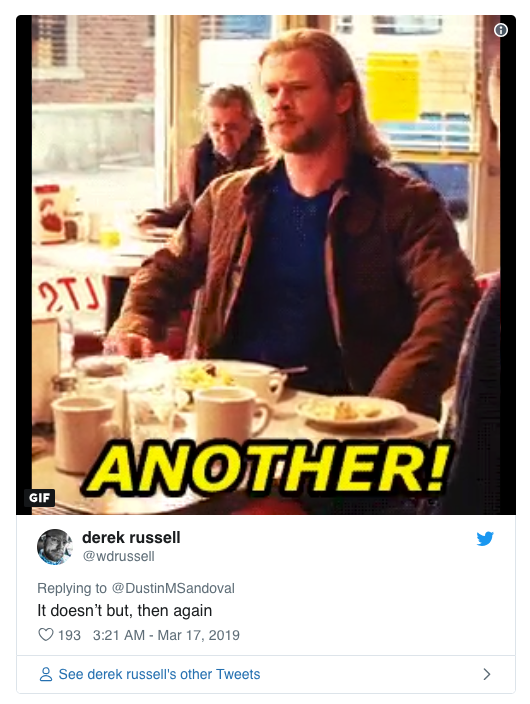 To put the question out there and have the fans, your audience tell you they don’t want another trailer is pretty impressive both in regards to the self-restraint of the fandom and how impressively Marvel have created something so special - the people choose to wait.

I’m not sure how they managed to do it, maybe it’s the great cast they’ve put together, the impact and power of the universe Stan Lee created and it’s powerful following. Or maybe they’ve just chosen the right time, place and direction to share these stories.

The Russo brothers managed to keep the ending of Infinity War a secret and there were very few spoilers released online during the films cinematic run which says something in itself. Enough of the population is invested in this Universe to live by a code asked of us by Marvel; #ThanosDemandsYourSilence was a trend they started to ensure fans don’t spoil it for others.

The less information Marvel release, the happier we are - even if the curiosity and need to know more is engulfing us. We want to enjoy the movie as it is and experience the unravelling of the story for ourselves rather than hear it elsewhere - be it marketing or spoilers and it seems Marvel gets that. Or are at least are using it to their advantage.

Unfortunately, spoilers have already been leaked online this time around so be careful you don’t accidentally find yourself reading a spoiler. This has inspired yet another letter from The Russo Brothers and another hashtag #DontSpoilTheEndgame 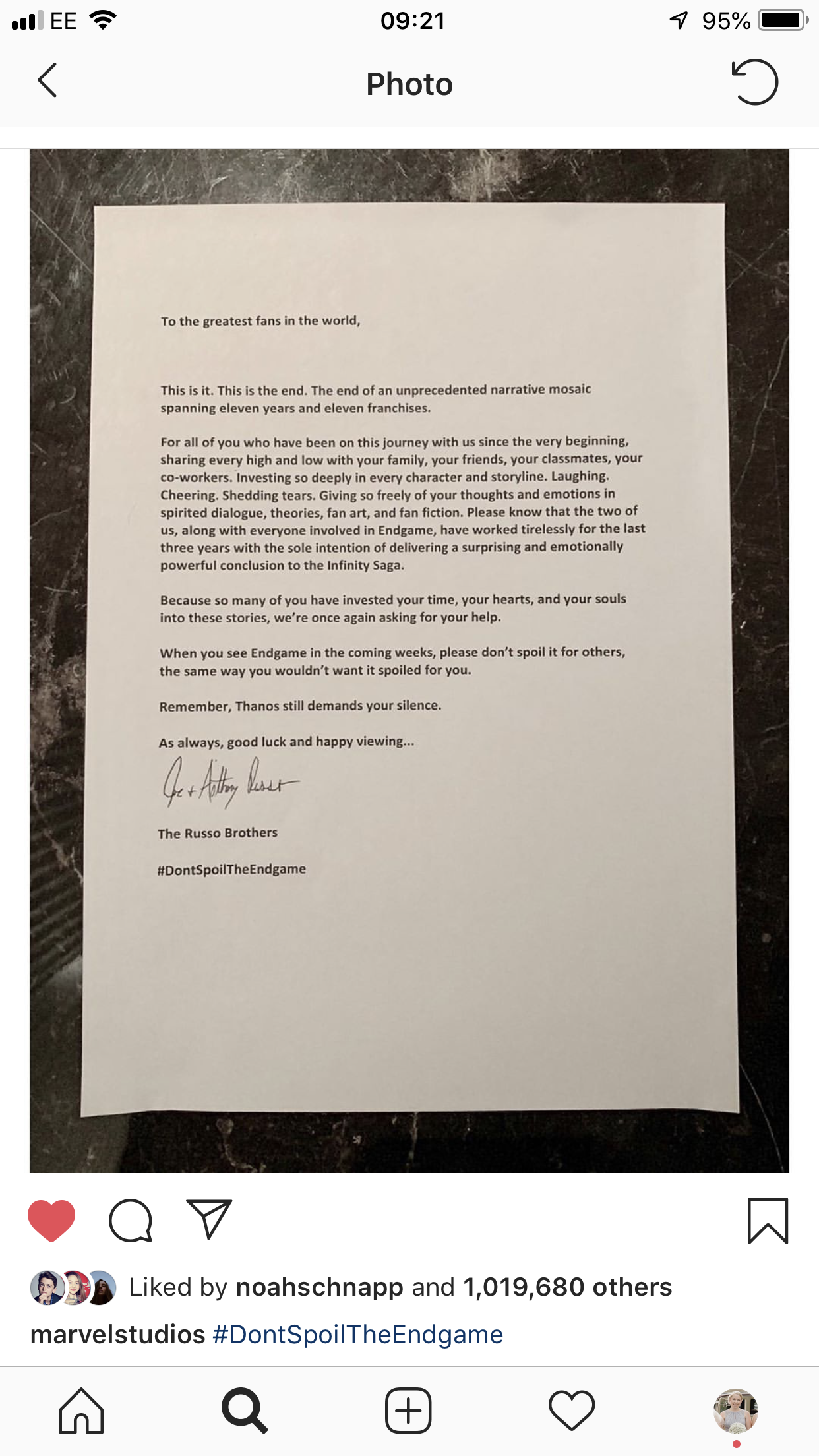 Marvel is in a unique situation because they have created a story that has happened over a period of 22 movies, spanning years, planets and life forms. They haven’t heavily invested in their marketing this time because their audience doesn’t need it. The world is too invested in this story and if they chose not to do any marketing for Avengers: Endgame, we would all still be lining up to see it at midnight. Well, you know if people could have booked tickets for any of the screenings. It seems only so much could be done because the day the cinema tickets were released, cinema sites went down everywhere.

The Odeon gave you a load screen for hours with no chance of actually getting you anywhere while the Vue originally experienced difficulties but once the queue system was sorted, people were left waiting in a digital queue for over an hour just to access the Vue website. 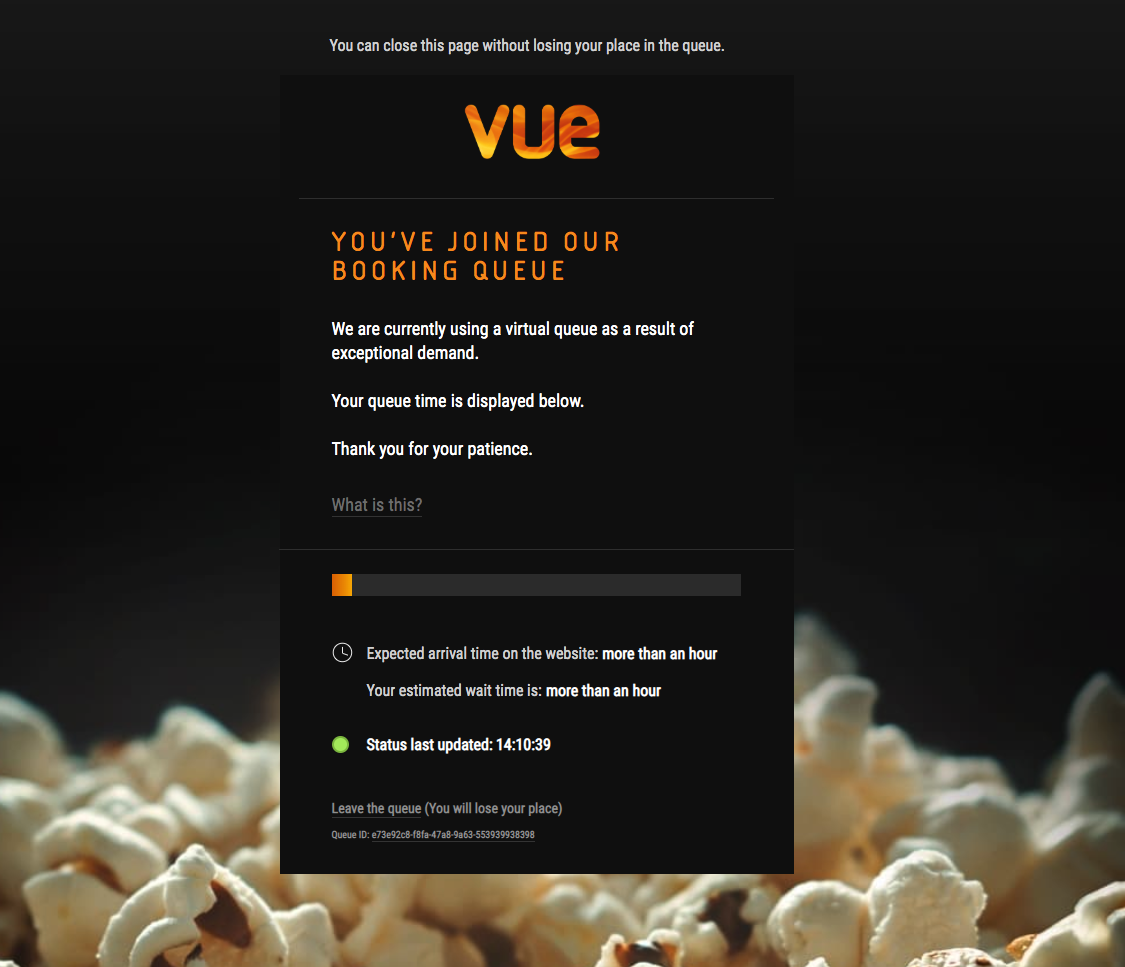 Maybe Thanos had something to do with it, maybe not but it’s safe to say, though they had the time to prepare for what was going to be a popular release, it seems no time was enough to prepare for ‘the cinematic event of the decade.’

Marvel has done a fantastic job in giving the audience exactly what they wanted. Not very much. I don’t know about you but I’ve already booked my ticket and can’t to see how it all ends - maybe I’ll see you there.

All I will say is, am I the only one hoping that it will end with no post-credit scene? Or is that just me? It would be just like Marvel to leave us sitting in our seats for a post-credit scene that won’t ever come. It is the end of the Infinity Saga after all.