The Failure that was the Fyre Festival 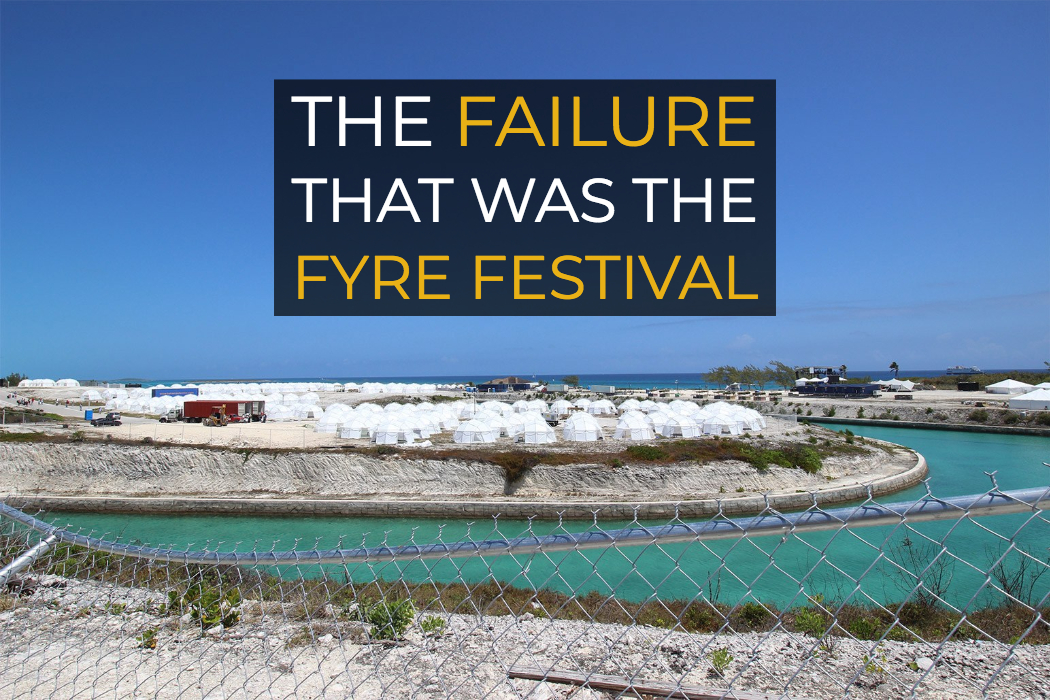 Last month the Fyre documentary dropped on Netflix, reminding everyone of the all-around disaster that was the Fyre festival back in 2017.

Just in case you’ve been living under a rock and haven’t heard about it, let me explain. The Fyre festival was set up by Billy McFarland and it was to be a super exclusive festival costing up to $100,000 (£75,000) a ticket. There were to be yacht parties and VIP huts, huge headlining acts and supermodel after supermodel with 5-star meals. I guess if you’ve got the money to spend on one weekend it sounds like a festival goers dream.... Until it turned into their worst nightmare.

The Fyre festival used social media, namely Instagram, to create and generate hype for the festival with a minimal level of success. They shared beautiful location shots and other creative content across their social channels with the help and support of over 80 influencers. It didn’t take long before everyone was talking about this ‘Exclusive Festival Experience’ that was the Fyre Festival.

However, they had sold only a mere 8,000 tickets of the 40,000 they’d predicted by the time the first guests started to arrive on the island. Sure people were seeing the influencers posts and liking them, but they weren’t converting. It’s no good advertising something if no one wants to buy it. Maybe it was the cost of the tickets, maybe it was how too good to be true it seemed, or maybe people wanted to see how the first one turned out before trying a new experience.

Big names such as Kendall Jenner and Bella Hadid were both attached to the festival with Jenner being wire-transferred $250,000 for a single Instagram post promoting the festival to her followers. Some other posts shared by other social influencers were simply an orange square as can be seen below which had a whopping 88.1 thousand likes at the time of this screenshot.

‍Alongside the social influencer reliance of his marketing, big money was spent on creating some videos to promote the event. McFarland flew out several supermodels for a weekend of partying and photoshoots creating a ‘picture perfect’ festival atmosphere, which was probably as ‘festivaly’ as the entire event was going to get.‍

The ad was full of influencers, well-known individuals with a mass-following that would appeal to their target market. With celebrities like Kendall Jenner alongside beautiful location shots and enticing subtitles, you can see why and how the video was as successful as it was and only increased the hype.

While on social, the festival looked like it was to be the event of the year, behind the scenes they were struggling to find the money or the resources to accommodate the festival. All of the money they had, disappeared before they could put a dime into the actual festival itself. It turns out they were giving away and selling too many tickets to a festival on an island that simply wasn’t big enough, and considering they only sold 8,000 of what their predicted 40,000, the situation could have been a lot worse with thousands more people being completely stranded.

There wasn’t enough housing on the island to accommodate the numbers, the local businesses on the islands all chipped in to help, providing food to those on the island to those who were involved in the planning, to help build the huts and buildings, all expecting to get paid when in reality they were left with a mess, mass debt and disheartened employees when in all their hard work earned them nothing but debt.

When it came to the festival weekend and people started to arrive, those on the island took to live-tweeting their experience on Twitter. Documenting how luggage arrived in shipping containers at night, with no lights to help you find your case. How the luxury tents were actually half built leftover hurricane tents because there was no money and instead of the ‘best food there is to offer,’ they received cold cheese sandwiches.

It took hundreds and thousands of dollars to get the Fyre festival noticed, lots of man hours and social media influencers, but it only took one picture to tear it all down.

The Fyre festival was a huge disaster for those involved but there is no doubt that through their marketing was flawed, it worked to a degree. They knew who their target audience was and they knew the best way to reach them and they utilised that. Their Instagram support, their partners and their messaging created this idealistic event, one that you couldn’t miss. What they were offering seemed too good to be true, which although might have been a hook to begin with, turned into a harsh reality for thousands.

The truth is no matter how good your marketing is, or even how bad your marketing is, if there isn’t a product to sell with good enough reason to purchase, you’re not going to get any conversions. Ultimately although FuckJerry Media appeared to know what they were doing, their reach was high but their product simply wasn’t selling as well as they thought it would.

If you want to read more, take a look at the Fyre Festival Pitch Deck here. It's a very interesting insight into what could’ve been the best music event we’ve ever seen in decades but ultimately resulted in an absolute joke. While you're at it why not check out the Hulu and Netflix documentaries. I promise you, they're both worth a watch!